A while ago I wrote this article for AirMed and Rescue Magazine. Having little knowledge of aircraft and air ambulances (or HEMS – Helicopter Emergency Medical Services) beforehand, I made sure I did plenty of research before interviewing the chief pilot of Amsterdam’s air ambulance service about how they get started up and ready to fly missions so quickly.

The article is in the June/July issue and on the magazine’s website now. A taster of the article, which was written with other HEMS professionals in mind, is below… 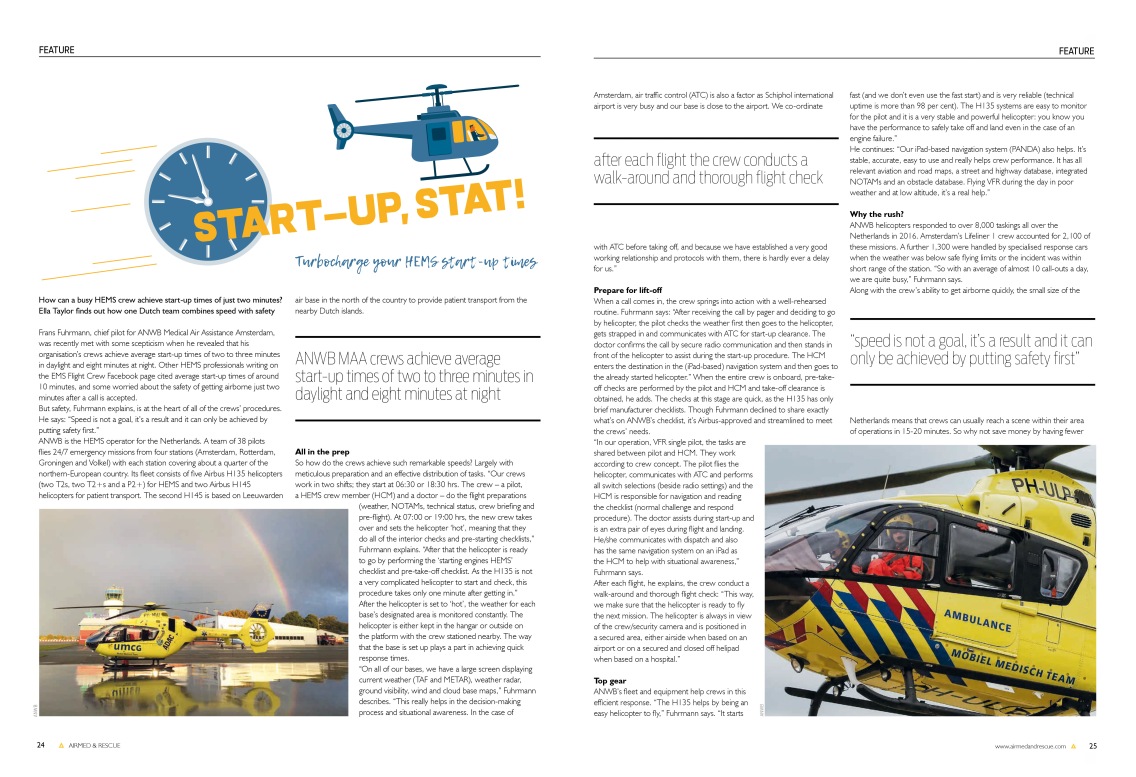 How can a busy HEMS crew achieve start-up times of just two minutes? Ella Taylor finds out how one Dutch team combines speed with safety

Frans Fuhrmann, chief pilot for ANWB Medical Air Assistance Amsterdam, was recently met with some scepticism when he revealed that his organisation’s crews achieve average start-up times of two to three minutes in daylight and eight minutes at night. Other HEMS professionals writing on the EMS Flight Crew Facebook page cited average start-up times of around 10 minutes, and some worried about the safety of getting airborne just two minutes after a call is accepted.

But safety, Fuhrmann explains, is at the heart of all of the crews’ procedures. He says: “Speed is not a goal, it’s a result and it can only be achieved by putting safety first.”

ANWB is the HEMS operator for the Netherlands. A team of 38 pilots flies 24/7 emergency missions from four stations (Amsterdam, Rotterdam, Groningen and Volkel) with each station covering about a quarter of the northern-European country. Its fleet consists of five Airbus H135 helicopters (two T2s, two T2+s and a P2+) for HEMS and two Airbus H145 helicopters for patient transport. The second H145 is based on Leeuwarden air base in the north of the country to provide patient transport from the nearby Dutch islands.

All in the prep

So how do the crews achieve such remarkable speeds? Largely with meticulous preparation and an effective distribution of tasks. “Our crews work in two shifts; they start at 06:30 or 18:30 hrs. The crew – a pilot, a HEMS crew member (HCM) and a doctor – do the flight preparations (weather, NOTAMs, technical status, crew briefing and pre-flight). At 07:00 or 19:00 hrs, the new crew takes over and sets the helicopter ‘hot’, meaning that they do all of the interior checks and pre-starting checklists,” Fuhrmann explains. 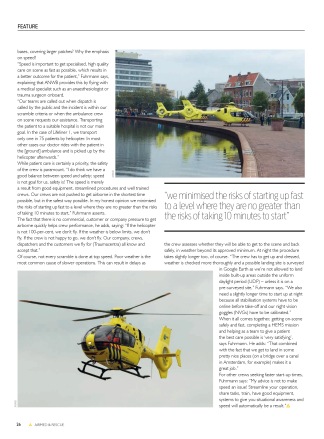 My hellebore is flowering! And other plants in the garden are looking more colourful. Spring doesn’t feel so far off today. Yey!
Delicious lunch and wander around the beautiful grounds of The Pig for Sam’s early birthday treat. Then back home to find our sweet girls having a cuddle together!
Last night, we went axe throwing. It was pretty hard.
Dodged the Bath Christmas markets in yesterday’s lunch break and enjoyed the light golden by the river instead
Moved my climbing rose to the front of the house today at last! And yes those are flowers on it in November - it seems to be having a weird autumn resurgence!
I gave the mallow and Himalayan honeysuckle a big autumn prune yesterday, with lots of help from the cats
These two don’t like each other much! 😆💕 #catsofinstagram
That feeling when you’ve just had your hair brushed. #catsofinstagram #prettycat
Sam ran the Yorkshire marathon so fast (smashing his PB by 9 minutes) that I didn’t get a picture of him. So here are 44 people running in a Viking longboat costume instead
%d bloggers like this: